● Playing time: 3x 10 mins, modified running time (stopped after penalties and goals only). During the last 2 minutes of every match the time is stopped with the whistle. The breaks between periods are 3 mins. Final game – 3x 12 mins stopped time, the breaks between periods are 3 mins.
● In the event of a tie score at the end of play-off games each team is awarded 3 penalty shots. If the game is still tied, there shall be 1 penalty shot for each team until the game is resolved. In case of a tie score at the end of the final game the 5 min. sudden-death overtime periods follow until the game is resolved. Round-robin games can end with tie (see tournament system below).
● Shot limit is 30 s, clear-up limit is 10 s.
● Penalties: A minor penalty 1 min. for personal fouls (cross-checking, tripping, slashing, holding etc.), a major penalty 3 mins for dangerous fouls (charging into the boards, butt-ending attempt etc.).
● Number of players for each game: 23 incl. goalies, number of players in team for the tournament is not limited. A player can play only for one team in the tournament.
● Coincidental minor/major penalties: when coincidental minor penalties or coincidental major penalties of equal duration are imposed against players of both teams, the penalized players shall all take their places in the penalty box and teams shall play 5 on 5. Such penalized players should not leave the penalty box until the first non technical stoppage of play following the expiry of their respective penalties.
● A match penalty involves the suspension of the player for the balance of the game and the offender shall be ordered to the dressing room immediately. The “in home” player is to replace the penalized player for the full three minutes of playing time regardless of the number of goals scored. A player incurring a Match Penalty shall automatically receive a game suspension. The Organizing Committee reserves the right to expel such a player from the tournament.
● Time-outs: each team shall be allowed a maximum of one 30 sec. time-out per game.
● Teams are obligged to have proper and unified jerseys incl. shorts. Two sets of uniforms are welcome. In case that opponents have similar uniform colors, a set of pins will be provided to one of the teams (a toss will decide).
● Traditional wooden sticks and large goalie sticks (Wall) are NOT allowed.

As the tournament is also a promotion of the game of lacrosse to public and media we ask all players to play fair and within the rules and spirit of sportsmanship.

Playing system 2021
All twelve teams start in one round-robin group. Each of them plays three games against various opponents.
Team standings after their four round-robin games is decisive for the play-off settings. Top four teams qualify to the Gold semi-finals. Teams ranked 5th to 8th will compete for overall 5th to 8th place in Green semi-finals, teams ranked on 9th–12th place will compete for overall 9th to 12th place in Blue semi-finals.
All round-robin games will be played using the following scoring system: Maximum five points total will be awarded as follows: period win – one point, period tie – half point, win the game – two points, tie the game – one point. The game can end with a tie.
In Y and Z group winner of the game in regular playing time receives 3 points. In case of a tie score each team receives 1 point and penalty shots (serie of 3 and then eventually one auntil the game is resolved) follow to decide the winner. The winner of penalty shots gains additional point.
The following criteria decide the team standings in round-robin group:
1. number of points;
2. head-to-head match final result;
3. head-to-head match number of points;
4. total scored/received goals difference;
5. total higher number of scored goals;
6. toss. 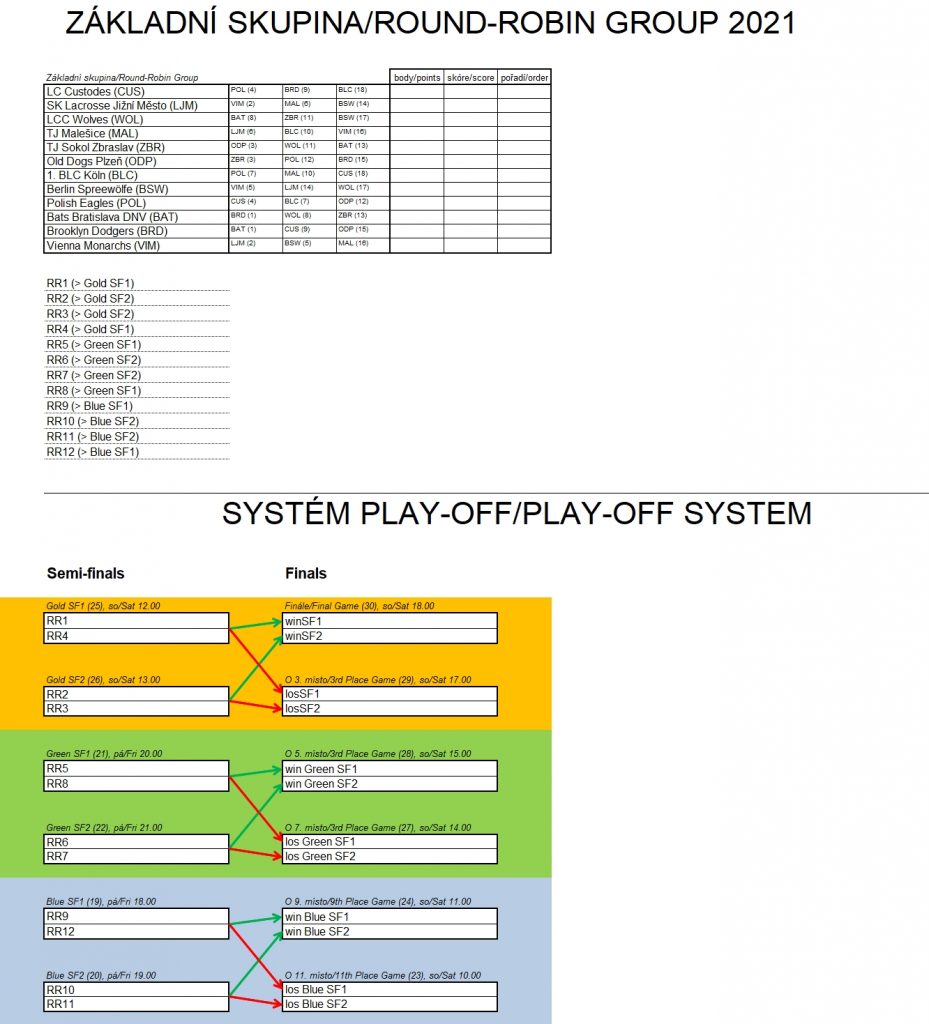